Through the acquisition of the assets of Austrian-based ingredient supplier Österreichische Laberzeugung Hundsbichler GmbH, Chr. Hansen will further expand its enzyme production and presence into the traditional segments of specialty cheeses. Hundsbichler products are widely recognized for high quality, and this acquisition will enable Chr. Hansen to offer cheesemakers a second-to-none product portfolio in the animal rennet space.

Hundsbichler, founded in 1947 and headquartered in Langkampfen, Austria, is among the leading suppliers of animal rennet to the cheese industry. Key products include the BioRen® brand ranging from mainstream products to more specialized items used for production of typical, traditional cheeses.

Chr. Hansen sees a strong fit between its dairy business and Hundsbichler, which is expected to provide attractive opportunities for synergies within sales, including cross-selling, supply chain improvements and innovation. These synergies are expected to be achieved in the coming two years. The assets of Hundsbichler was acquired for an undisclosed amount and comprises customers, products, trademarks and production equipment. The acquisition will not impact the financial guidance of Chr. Hansen and will only have a minor impact on sales and earnings in 2018/19.

Chr. Hansen achieved strong results in 2017/18, and growth is set to continue in 2018/19. CEO Mauricio Graber says: “2017/18 was another good year for Chr. Hansen, and we finished strongly in Q4 driven by Food Cultures & Enzymes and Health & Nutrition. We achieved all the overall financial targets that we set at the beginning of the year, in spite of currency headwinds impacting both revenues and earnings, with organic growth reaching 9%, EBIT margin before special items increasing to 29.2%, and free cash flow before special items and acquisitions increasing by 4% to EUR 196 million. For the full year, Food Cultures & Enzymes delivered strong growth organic of 12%, performing well above the long-term ambition of growing 7-8% per year, while Health & Nutrition and Natural Colors delivered moderate growth and grew by 8% and 5%, respectively.

The Board of Directors of Chr. Hansen Holding A/S has appointed Mauricio Graber as new Chief Executive Officer (CEO) as of 1 June 2018. 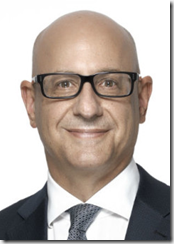 Mauricio Graber (54) has been President of the Flavours Division of Givaudan S.A. and a member of Givaudan’s Executive Committee since 2006.

Mauricio Graber holds a BSc in Electronic Engineering from Universidad Autónoma Metropolitana in Mexico, and a Masters in Management from the JL Kellogg Graduate School of Management, Northwestern University, USA. His professional career started in 1989 with The Nutrasweet Company in the USA as Business Development Manager. After two years in the role, he returned to Mexico in 1991 to become Regional Head of North Latin America.

Over the past 10 years Mauricio has led Givaudan Flavours to strengthen its global industry leadership position. He has built a customer centric culture, accelerated commercialization of innovation, invested in developing markets, driven productivity programs, and delivered both organic growth and successful integration of strategic acquisitions. In addition, he has developed internal talents and built a strong organization.

Chr. Hansen has entered into a partnership with Rheolution Inc. on the global distribution of Rheolution’s CoaguSens™ and ElastoSens™ products.

Aimed at cheesemakers, the products offer real-time analytics of the milk coagulation process. In real time and near the vats, they measure the flocculation point (where solid particles are separated from the liquid), the milk gel firmness, as well as the speed of coagulation.

The milk gel-cutting step is often the least controlled step in the cheese making process, but with the insights that this technology can derive, cheesemakers will know precisely the optimal time to cut the cheese curd at a controlled firmness. This will enable them to retain the greatest amount of protein and fat from the milk in their cheese, thus increasing the overall value generated from the milk processed.

The market for children’s products is increasing rapidly with the trend towards smaller families, combined with higher disposable incomes, and parents are looking for foods that are healthy as well as tasty and convenient. At the same time, the awareness of probiotics – good bacteria – is increasing, as more and more scientific data on the correlation between digestive health and overall health is published, creating new opportunities for the innovative dairy producer.

Now Chr. Hansen presents ProKids, a concept solution for a tasty probiotic children’s drinking yogurt. It is Chr. Hansen’s newly developed freeze-dried DVS® culture, nu-trish® GY-1, which contains the LGG® probiotic strain together with a compatible yogurt culture, and a proven recipe that make up the backbone of the ProKids concept.

The market for fermented dairy alternatives has shown strong growth in recent years albeit from a small base. Today the segment constitutes less than 1% of the fermented foods market but it has seen the highest growth rates within the category in 2015 and 2016 (source: Euromonitor).

In August, Chr. Hansen commissioned a consumer survey to better understand usage of and attitudes toward dairy alternative products. The survey uncovered that

Chr. Hansen is launching a product range that is well-suited to tap into the opportunities this new market trend is offering: Two new YoFlex® (yogurt) cultures and two new nu-trish® (probiotic) cultures.

The revenue reached EUR 242 million, compared to EUR 214 million in Q1 2015/16, corresponding to organic growth of 11%. Divided to business area the results were:

Chr. Hansen Holding A/S has entered into an agreement with Thomas Schäfer to take up the position of Executive Vice President and Chief Scientific Officer.

Thomas is currently employed as Vice President at Novozymes and will take up his new position as soon as possible, expected during the spring of 2017.He will report to the CEO and become a member of the Executive Board.

Thomas will lead Chr. Hansen’s scientific organization for Food Cultures and Enzymes, and for Health and Nutrition (the R&D organization for the Microbial Solutions Platform). This organization consists of 210 employees, largely based at company headquarters in Denmark.

Today, soft cheese producers are faced with two main challenges – namely the texture and flavor of the cheese that are likely to change significantly during shelf life. This undesired process occurs as proteins break down into peptide fractions, which ultimately can lead to an increased amount of bitterness, a runny texture or the unpleasant smell of ammonia.

CHY-MAX® Special is a patented coagulant that can put an end to these concerns. With its formula, producers and consumers are guaranteed a soft cheese with great texture and flavor throughout the entire shelf life. With its stable ripening profile, extended shelf life is made possible.

“2015/16 was overall a good year for Chr. Hansen. We reaffirmed the short- and long-term growth opportunities through our strategic review, and our financial performance was strong. Organic growth reached 12% and the EBIT margin before special items ended at 28.2%, up from 27.1% the year before. Finally, free cash flow before special items and acquisitions was EUR 175 million, an improvement of 16% despite our continued investments in future growth. So I can only be pleased with how we performed in 2015/16” says CEO Cees de Jong.